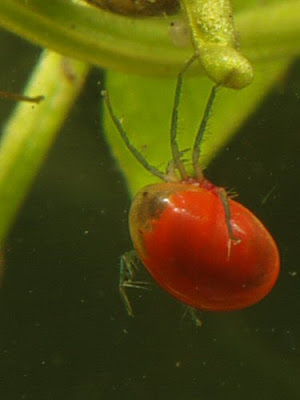 Some groups are just so diverse that it is difficult just to know where to start in introducing them. The mites of the Prostigmata are definitely one such group. Even though few would doubt their coherence, their morphological diversity is such that it is difficult to identify features that characterise them all. The majority are small and/or poorly sclerotised mites but some species are extremely large (by mite standards, at least) and others are heavily armoured. The name ‘Prostigmata’ refers to the presence in many species of tracheae with the spiracle openings between the cheliceral bases but many lack tracheae. In one group, the Heterostigmatina, the males and juveniles usually lack tracheae but adult females have tracheae with the spiracles placed at the front of the sides of the body, outside the chelicerae. Prostigmatans include predators, plant-feeders and parasites; their chelicerae, accordingly, may be pincer-like like those of other mite groups, or they may be variously modified. Many groups have the chelicerae fused into a puncturing stylophore; others have the mobile finger adapted into a protruding blade or stylet. The plant-feeding spider mites of the Tetranychoidea have the mobile fingers modified into long thin whips that can be retracted right back into the body, or extended to form the two halves of a sap-sucking tube. Even such features as the number of legs can’t always be relied upon: whereas most Prostigmata have eight legs as is usual for arachnids (though, as with other mites, the fourth pair of legs only develops in the post-larval instars), the hind pairs are reduced or lost in a number of parasitic groups. The gall-forming plant mites of the Eriophyoidea have only four legs at the very front of the body, with an anal sucker at the end of the body to hold them in place.

The Prostigmata are a diverse group of mites exhibiting a wide range of morphologies. The name of the group refers to the tracheal system which, if present, opens at the base of the chelicerae or on the anterior prodorsum (Lindquist et al. 2009). Many members of the group are more or less soft-bodied, but the Labidostommatidae are a group of heavily armoured predatory mites with an undivided dorsal shield and a complete ventral armature (Walter et al. 2009). In many members of the subgroups Anystina, Parasitengonina and Eleutherengonides, but not in the remaining subgroups, a terminal seta on the palptibia has become large and claw-like, and together with the reduced, laterally displaced tarsus forms a distinct arrangement referred to as the ‘thumb-claw process’ (Walter et al. 2009). The tibial ‘claw’ and the tarsus work together for grasping prey. 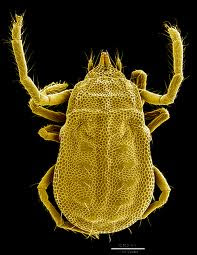 The phylogeny of the Prostigmata remains poorly known. Six major groups (‘cohorts’ or ‘supercohorts’) were recognised in the Prostigmata by Walter et al. (2009), but Dabert et al. (2010) found in their (admittedly somewhat preliminary) molecular analyses that relationships between the groups were not stable with regard to analysis method. These groups are the Labidostomatidae, Eupodides, Anystina, Parasitengonina, Raphignathina and Heterostigmatina.

Phylogenetic analysis supports the Labidostommatidae as the sister lineage of the remaining Prostigmata (Dabert et al. 2016). The Labidostomatidae are a small group of heavily armoured predatory mites with an undivided dorsal shield and a complete ventral armature. As well as their heavy armature, labidostommatids differ from other prostigmatans in having six pairs of prodorsal setae; the remaining Prostigmata all possess fewer. Other distinctive (though not unique) features of the Labidostommatidae include chelate chelicerae, the presence of an unpaired median ocellus, and two pairs of prodorsal trichobothria. They are predators of Collembola and other small arthropods, and are found in soil or associated habitats (Walter et al. 2009). About fifty species of Labidostommatidae have been described to date from around the world. The genus Sellnickiella is most diverse in the Southern Hemisphere with species found in South Africa, Australasia and South America. 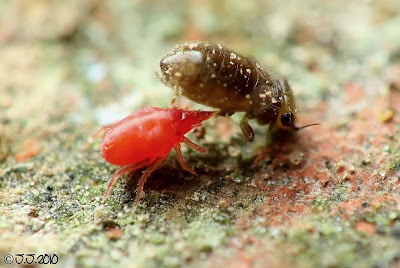 The Eupodides were reocgnised by Walter et al. (2009) as a diverse group of mites largely united by plesiomorphic characters relative to other Prostigmata, including the Eupodoidea, Eriophyoidea, Tydeoidea, Halacaroidea and Bdelloidea. Most are soft-bodied forms with striated integument, weak subcutaneous sclerites, and reduced opisthosomatic chaetotaxy. Most have a pair of specialised sensory setae called bothridia on the prodorsum, but these are missing in the Eriphyoidea and the marine Halacaroidea. The snout mites of the Bdelloidea are predatory mites with the chelicerae extended into an elongate proboscis; other members of the Eupodides include plant-feeders, fungivores and parasites. Members of the Halacaroidea are aquatic; the remaining lineages are terrestrial. Phylogenetic analyses of the Prostigmata (e.g. Dabert et al. 2016) have not supported monophyly of the Eupodides.

Halacaroidea also lack prodorsal trichobothria (present in other Eupodides) and possess large, often serrate, lateral claws on the leg tarsi that function as holdfasts for clinging to the substrate. Most species are included in the family Halacaridae, characterised by an idiosomal dorsum bearing one to four platelets and five to ten pairs of setae. The Australian genus Peza, in which the idiosomal dorsum has twelve to sixteen poorly defined platelets and sixteen to twenty pairs of setae, is placed in its own family. Two species have been described in this genus, P. daps and P. ops. Peza ops is widely distributed in southeastern Australia and may be recognised by the presence of eyes and twelve platelets on the dorsum. Peza daps lacks eyes and has sixteen platelets on the dorsum, and appears to be parasitic on the gills of the burrowing crayfish Engaeus fultoni. 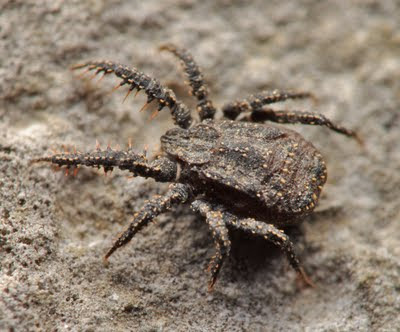 The Anystides of Walter et al. (2009) included two subgroups, the Anystina and Parasitengonina. Again, Dabert et al. (2016) did not recover monophyly of this grouping but instead placed Anystina and Parasitengonina as distinct lineages. The Anystina are mostly predatory mites; some species of the families Caeculidae and Anystidae are relatively large, over a millimetre in length. The Caeculidae, rake-legged mites, are particular favourites of mine. These heavily sclerotised mites have a double ventral row of large spine-like setae on the forelegs; they sit in place with the forelegs raised until a springtail or some other small animal walks underneath them, at which point they drop the legs like a cage. 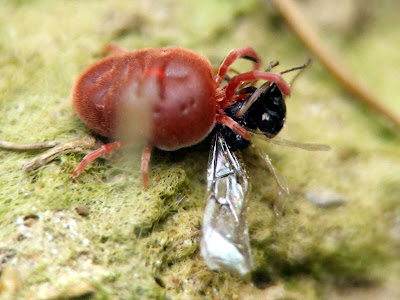 The Parasitengonina are most notable for their complex life cycles, with parasitic larvae and free-living predatory adults. The group includes both terrestrial and aquatic species; the aquatic Hydrachnidia are particularly diverse and often heavily armoured. Differences between larvae and adults are so great that taxonomists have often had no choice but to establish separate classifications for both, with relatively few larval ‘species’ as yet connected to their corresponding adults. Some of the terrestrial species are particularly large: velvet mites of the Trombidiidae may be over a centimetre in length. 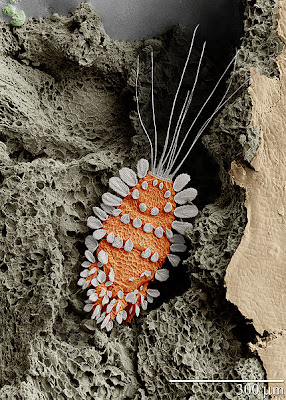 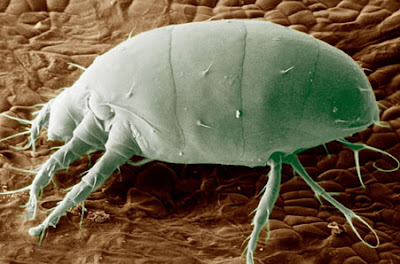 Broad mite Polyphagotarsonemus latus, from here. Note the oddly stick-like modified hind legs, which are used by the male to carry larval females until they moult to maturity, as also done by the Scutacaridae.

The unusual tracheal system of the Heterostigmatina has already been referred to; this group also includes both free-living and parasitic species, with many species found in association with insects. Most species have a dorsal covering of sclerotised plates, and the palps are often greatly reduced.

Characters (from Lindquist et al. 2009): Tracheal system usually present with one pair of stigmata opening between bases of chelicerae or on anterior prodorsum (sometimes absent), sometimes associated with peritremes dorsally on cheliceral bases or on anterior margin of prodorsum; prodorsum usually with four or fewer pairs of setae or hypertrichous, sometimes including one or two pairs of bothridial sensilla; subcapitulum without rutella; chelicerae rarely chelate, usually with fixed digit sheathlike or completely regressed, movable digit usually a hook, knife, needle or stylet-like structure; cheliceral bases sometimes fused medially; palpi simple or modified into a thumb-claw process, sometimes reduced; coxae of legs integrated with venter of podosoma, coxal fields contiguous or II-III separated; ambulacra of at least legs II and III usually with two lateral claws and with or rarely without a median empodium that may be padlike or rayed and often armed with tenent hairs, or occasionally claw- or suckerlike; opisthosoma lacking paired lateral glands; opisthosomatic setal row c usually with two pairs of setae, rarely with three pairs or hypertrichous.

[S61] Southcott, R. V. 1961. Studies on the systematics and biology of the Erythraeoidea (Acarina), with a critical revision of the genera and subfamilies. Australian Journal of Zoology 9: 367–610.